Dear Soon To Be Graduates,

I am so excited for you! You’re getting ready to graduate and it’s clear that you have a bright future on the horizon! Everything is so new and exciting and you’re about to start the journey into “adulthood”…but I want to give you some unsolicited (and significantly condensed) advice….PLEASE don’t waste your 20’s.

School is winding towards the end of the year and over the course of the year(s), I had been invited into classrooms to speak with students in photography clubs as well as future business leaders of america clubs (FBLA) about such topics as starting a business and tips/tricks/advice I’ve gathered along the way. I’m still humbled to even be asked because it wasn’t that long ago (who am I kidding-I’m old, it was a LONG time ago haha) that I was in their seat and would NEVER have guessed this is where my life would have led me.

I didn’t even pick up a camera until I was in college so it’s not like I grew up in the industry, had relatives that owned businesses that I could go to and I certainly didn’t have an interest in working for myself at their age. Hell, we were always taught that you were SUPPOSED to go to college, SUPPOSED to graduate and find a REAL grown up job, work at that said job and built up a good 401K/pension and retire from said good job so that you could enjoy the rest of your golden years doing all the things you wanted to do. That was engrained into me from a young age. No where in that scenario did anyone ever encourage me to be an entrepreneur or plant the seed that it would be possible to be on my boss, be able to build up my OWN retirement doing something I love and be able to do all those things I love BEFORE I retired-I didn’t have to wait to enjoy life in the way I wanted.

Did I mention that after you got your REAL job, you were supposed to get married, find a house and buy a car? Not just any house or car, but the BEST ones you could afford so that you could prove to your peers that you had “made it”.  “Look at Johny over there, he just bought a gorgeous home and drives an expensive car, he must have done really well for himself”. WRONG! In most cases, Johny is working at a job he probably doesn’t love, to pay for the things we were supposed to buy that he probably couldn’t afford, so that he could impress people that didn’t really matter. Do you see where I’m going with this. This has become the cycle most of American employees fall into. Get a job that makes good money, but then live outside of their means so they end up having to work work work to pay for the things. They get burnt out of their jobs and complain their job doesn’t pay enough all the while wishing they could be traveling, etc…..but we’re told THAT stuff has to wait until retirement. I hear so often “when I retire, I am going to travel with my wife/husband”…..why? Why do you have to wait until you retire?

This is a lesson I learned VERY early in my life. Maybe it was because my Mom had to (out of necessity) stretch a dollar further than a dollar could possibly be stretched. She did it though-at one point raising 2 kids on less than $12K a year. We were below the poverty line. My parents had me at a very young age which ultimately set them up for a much tougher life than those who had gone to college. My mom had to drop out of the 9th grade….ninth grade because of me. Rather than going the other route of adoption or even worse-abortion-they chose to raise  a child…a child raising a child in a sense.

Needless to say, growing up, we didn’t have the best of things. I didn’t have name brand clothes-and if I did it was because they were hand me downs, if you’ve been following my blog for any amount of time you know that early on for some of the holidays, we would stand in line at local churches to take advantage of the Toys for Tot’s program. I remember very distinctly the smell of motor oil as my parents tore apart carburetors on the newspaper covered kitchen table in order to collect the copper to turn in for scrap-every little bit helped. I lived in rat infested trailers, drove crappy cars-especially that blue Subaru, good LAWD that car was embarrassing and for a short while was on government assistance. I never knew how poor we were, I had nothing to compare it to until I started going to over to my friend’s houses. I think that’s around the time I started to observe a little more. I would pick up on conversations that had to do with money-or the lack thereof and how my mom would stretch a buck. I knew on the nights we had boneless, skinless chicken breasts it was a day that one of them got paid.


I knew that sometimes as I stood in front of the classrooms and talked about my story, my business and the struggles along the way, some of those students could relate on the same level and others could not. I could tell that when I looked into the crowd which students were listening intensively because they could see themselves in me and that they knew that just because of where they come from…didn’t mean it had to determine where they were going. I wish someone would have told me that back then. I wished someone would have given me permission to consider being a business owner but when you are the first to graduate high school AND go on to graduate college, there wasn’t anyone there to plant the seed because no one had given them seeds to plant. It’s a cycle as I like to call it-people think they are destined to live a certain life because of where they come from/who they come from. I knew there was something more……..I believed there was something more.

Looking back, I wouldn’t have changed anything. I think the way in which I grew up had a lot to do with how I view several things in my life…..especially when it comes to finances. Those close to me, know that I’ve always been fascinated in finance and socio-economics in general. I began picking up books about saving/investing/getting out of debt (total nerd!). I knew I had to do something different with my life in order to break the cycle so to speak. I’d have to get out of my comfort zone, value myself and start making good decisions. Every decision/choice you make will determine the quality of the life you will live. Sit and think about it…we all know people who are happy all the time and on the opposite end of the spectrum are the debby downers of life. When you compare their attitudes on life to the quality of their life, there is often a correlation. The majority of time, those that are bitter with life have made some very terrible decisions/choices along the way that got them there. We control our own destiny and as cheesy as that sounds-it’s the truth. That cigarette you’re smoking is a choice, that credit card you’re racking up is a choice,  the excuses you come up with because it’s easier than thinking of a creative solution-is a choice. YOU made the choices, you created/can create your life.

I learned that lesson very early in life and started making GOOD choices in my twenties. People like to say that the most important part of your life is in your 30’s or 40’s after you have established a career and started a family…I would beg to differ. For me, the most important part of my life was my 20’s. It’s what creates the foundation for the rest of your life in my opinion. Some of us squander away our twenties because YOLO right? 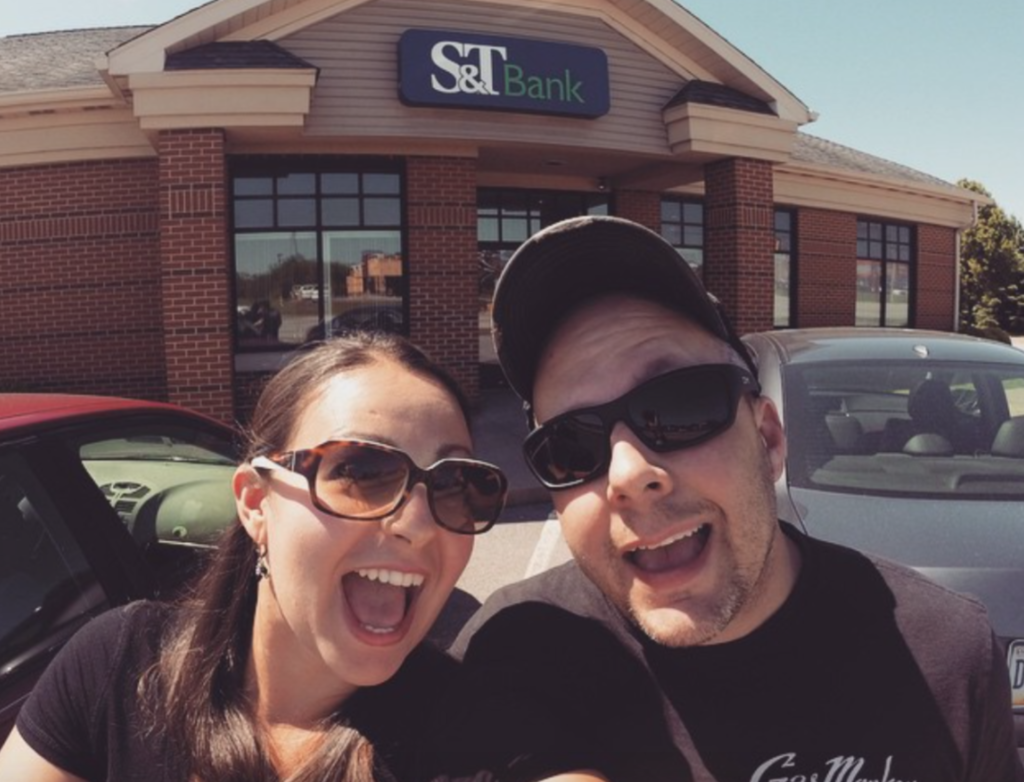 We took this photo the day we walked into the bank to pay off our mortgage.

My twenties consisted of working-sometimes 3 jobs at a time, building a business while simultaneously putting money away for retirement AND raising a family. Now don’t get me wrong, I TOTALLY had fun in my 20’s…we traveled, we went out just like everyone else, but I chose to do those things AFTER making sure the other things were taken care of first.  By the age of 33, I had paid off my student loans, had zero credit cards, paid off my house, had zero car payments, saved for retirement and started a business while being 100% debt free….because I didn’t waste my 20’s.  While everyone else in their 30’s, 40’s and 50’s are trying to get things paid off/get out of debt, we’re already there. I did this all while being a business owner….if I had listened to what I was SUPPOSED to do, I’d probably be in debt. Things that some people are waiting to do when they retire ..we are able to do now. We weren’t “lucky”, we didn’t get a windfall, win the lottery or even receive an inheritance…it was blood, sweat, tears…and recognizing that our 20’s was when we had to lay the foundation for the rest of our lives because I valued myself enough to know that I was worth it.

You are not where you come from, make good choices, work your butt off in your twenties and invest some of your hard earned money and YES..it’s perfectly acceptable to not go work for someone else if that’s what you choose. You don’t have to be rich..you just have to be smart! Work hard now….play hard later! FOR THE LOVE OF GOD-DON’T WASTE YOUR 20’S.

I’ll tell you the same thing I tell my own daughter each time she goes off somewhere with her friends…..”make good choices!”. <3